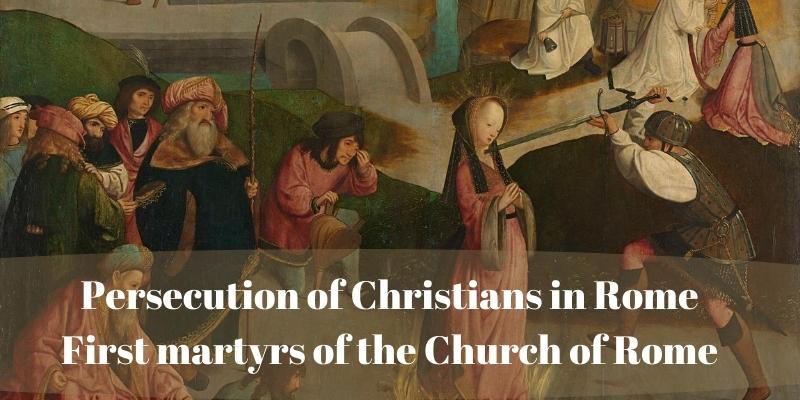 The ancient emperors of Rome wanted to wipe the new religion off the face of the earth. That is the current of Christianity. So Christianity was almost doomed to die in the early centuries of the Christian era. So a series of Roman emperors unleashed persecution of Christians in Rome. And wanted to eradicate this faith, which was considered dangerous to the fate of the Empire.

But the beginnings of Christianity were marked by violence and suffering in ancient Rome. There were times when Christianity was a religious doctrine condemned to death. And its supporters were hunted down as villains. This was the case in the early centuries of AD in the Roman Empire, which stretched from northern England to the Tigris and Euphrates, encompassing the civilized and known world. Many Roman emperors made an actual state policy out of the persecution of Christians in Rome, aiming to wipe Christianity off the face of the earth. It was the age of Christian martyrs. The first martyrs of the Church of Rome were the Christians. And the first Christians martyred in the reign of Emperor Nero were Peter and Paul, the apostles of Jesus.

Christianity is one of the most critical and widespread religions in the world. This religious faith has been stating policy for centuries. And its people are the leading supreme power in particular. Officially, the beginning of the persecution of Christians in Rome can be placed in the time of Emperor Nero. Known from ancient accounts as a demented and evil character.

Who ordered the persecution of Christians in Rome?

The Christians were usually small communities throughout the Empire, with a significant agglomeration in Rome. According to Tacitus’ Annals, the persecution of the Christians in Rome. It began after Nero set fire to Rome. In 64 AD, Emperor Nero, as another ancient author, Suetonius, claimed, ordered Rome to be burned to make way for his palace complex, the Domus Aurea.

According to apocryphal writings and ancient writers and philosophers, after the Great Fire of Rome, Nero ordered Christians to be martyred. He placed the blame for the destruction of Rome on their shoulders.

In that fire, much of Rome was turned to ashes. As the main culprit. So a general uprising was about to break out. Therefore, in this context, Tacitus says Nero found the scapegoat, the Christians. The emperor regarded that as a strange community—a sort of sect spreading a peculiar doctrine.

Places from the times of Persecution

So Nero was, beyond all his obvious faults, a cultured man with deep artistic inclinations. Historical information shows him to be a fine musician and painter. However, his upbringing and education in a deprived environment, with a power-hungry mother renowned for her cruelty, left deep scars on his labile psyche. Nero was a cruel emperor who pushed his artistic passion to madness. He consciously set fire to Rome, then blamed the fire on the Christians.

Nero’s persecution of the Christians in Rome was a cruel one. That’s why it’s also called the Nero Persecution, highlighting that Nero was so brutal that Nero was almost mistaken for the Antichrist.

At the time of the burning of Rome, Nero took up his harp and played the poem Conquest of Troy. He wanted to see and feel what it was like for a significant state to fall prey. To conquest by another. The burning of Rome and the deaths of thousands of people. Came about because of an ‘artistic’ dementia. Therefore, to hide his involvement, Nero needed a scapegoat. Using a ruse, he blamed the disaster on the Christians. They rushed to capture as many as possible and kill them in public. Ancient pagan authors such as Tacitus reveal that the persecution was appallingly cruel. Quote related to the persecution of Christians in Rome

“Nero did not technically speak, prosecute Christians for being Christian. He executed them for committing arson. True, they probably were not guilty, but that was the charge. Being a Christian was not punishable, but setting fire to Rome was.

It involved only the city of Rome. Nothing indicates that Christians elsewhere in the empire suffered any consequences. Even more significant, it appears that none of Nero’s successors, down to Trajan, persecuted Christians.

Between Nero in 64 CE and Marcus Aurelius in 177 CE, the only mention of an emperor’s intervention in Christian affairs, apart from the episode involving Trajan found in Pliny’s letters, is a letter from the emperor Hadrian that gives instructions to a local government to conduct his trials against the Christians fairly.”

Why did the Romans persecute the Christians?

Persecutions took place even under Trajan and his successor Hadrian. Years of persecution under Antoninus Pius, Commodus, Septimius Severus, Alexander Severus, and Maximinus Trax. Then persecutions happened occasionally, without a state policy directed against the new faith, as in the case of the first Roman to rebel against the Christians, Nero.

According to philosophical and historical accounts, the Romans persecuted Christians because of the Fire of Rome. Where Nero placed the blame on the Christians, and all of Rome revolted against this bizarre new sect and religion. Many Romans had a much more negative perception of Christians. That’s why the persecution continued.

Many others suspected of adhering to Christianity were executed. The emperor’s victims included his relatives, Christians, such as Flavius Clemens, his wife Flavia Domitilla, and the consul Acilius Glabrio.

How were Christians martyred in Rome?

As it is understood today in the Christian Church, martyrdom is death for the Christian faith. Although in the early biblical understanding, the end is not included in the meaning of the experience of martyrdom consists of the experience of death. The beginning of the history of this experience can be found in the New Testament. A death caused by the enemies of the faith. Takes upon himself a beautiful testimony as a faithful witness of faith in Christ.

Martyrdom begins after the crucifixion of Jesus. And the Pharisees and the scribes again condemn innocents like Jesus.

Who is the most famous Christian martyr?

Stephen, the husband, aroused the wrath of Saul the Pharisee. Who, after his zeal in opposing the Christians. Belonged to a strict and militant group of Pharisees characterized by revolutionary fervor. He believed that the great prophecies of the Kingdom of God were soon to be fulfilled. He probably felt his duty was to help God bring them to pass. And the way was to cleanse Israel of religious corruption. And the idea that Jesus was the Messiah.

According to the Bible, the most famous and first martyr was Stephen, who died in 0036 AD. However, Saul of Tarsus is first mentioned in the book of Acts in the account of the stoning of Stephen and the connection with the broader persecution unleashed in Jerusalem.

Stephen was a Greek-speaking Jew and one of the first seven deacons. According to the account in Acts, some Jews who had comaspora and settled in Jerusalem began an adversarial discussion with Stephen about what he had preached about Jesus. Stephen is of particularly important preaching and martyrdom seems to have had a tremendous impact on Saul.

Who was the first Roman emperor to convert to Christianity?

Constantine’s surprising change occurred on the eve of the battle with Maxentius, and, interestingly, he attributes his victory to the help of God. According to the Christian historians Eusebius of Caesarea and Lactantius, Constantine saw in the daytime sky, at high noon, a bright Cross above the sun with the inscription: in hoc signo vices. Then, at night, Jesus Christ appeared to him in his sleep with the sign of the Cross, which he had seen in the sky during the day, asking him to put it on the soldiers’ flags, a protective symbol in battle.

In the daytime, he made a flag, according to the model shown in the dream, with the Christian monogram, a flag called labarum. After this event, Constantine came closer and closer to Christianity. Convinced of its religious and moral value, he defended and supported it continuously, declaring it religio licita in the Roman Empire.

Who were the Roman emperors who persecuted the Christians?

The persecution of Christians in Rome has a long history. On Goodreads, we find that Bart D. Ehrman sustains the Triumph of Christianity that began in 64 and continued into the 4th century. We are ending with the Edict of Milan in 313. With the emergence and spread of the new religion in the Roman Empire. The persecution of Christians in Rome began. Christians were considered worshippers of pagan and alien gods. They refused to offer sacrifices to the Roman gods and outside society.

The Roman emperors who persecuted the Christians were the following:

The spread of Christianity throughout the Roman Empire caused concern in pagan Roman society. The Christians, mostly Jews, considered themselves superior to the Romans. And refused to sacrifice to the gods and the emperor. The Jews themselves prevented the spread of the Christian religion by sending from Jerusalem. Both to the cities of the Empire and other peoples. Their people accused the Christians to the Roman authorities of not obeying the emperor. But someone else. So the persecutions began under Nero in 64 and ended under Maxentius in 313.

When did Christianity become the official religion of the Roman Empire?

Christianity’s emergence as the predominant religion in the Roman Empire was not easy; however, it established itself against a motley religious landscape. This was primarily due to its ability to organize itself very well. But on the other hand, the Christian faith had a much more compelling message than the other religions in the Roman Empire. So the Christian divine services were simple, not requiring too much of the eyes and ears of the sophisticated pagan rituals.

According to official resources, in 313 BC, Christianity became the official religion in the Roman Empire. Unlike many of the Empire’s religions, Christianity distinguished between rich and poor, men and women, and free men and enslaved people.

Christian Persecution in Antiquity. I’d like you to see it on Amazon.

The church writer Lactantius states that Nero was already emperor when Peter arrived in Rome. So Peter, performing some miracles which he did by the power given him by God, converted many to righteousness and built up to God a temple of unchangeable faith. When he heard of these things, as soon as he heard that not only in Rome. But also everywhere, a great multitude was daily renouncing the worship of idols.

And, cursing the old faith, turning to the new religion, and being a cursed and wicked tyrant, Nero set himself to pulling down the divine temple and destroying righteousness: being the first of the persecutors of the servants of God, he crucified Peter and slew Paul.

Quizlet related to the Neronian Persecution