Emperor Titus was born in a small town in the Sabine country called Phalacrina, beyond Rate, on the 15th day of the December calendar, A.D. 0009. He was brought up by his father’s grandmother, Tertulia, at her estate in Cosa, Etruria.

According to biblical and historical accounts, Emperor Titus was a Roman emperor who demolished the great temple in Jerusalem and laid siege to the city of Jerusalem. All so that what Jesus prophesied could happen. That no trace of the temple would remain standing, Titus Vespasianus Flavius was an excellent emperor. He began his career as a military tribune in Thrace and then as a questor in Crete and Cyrene. When he became praetor, he spared nothing to curry favor with Caligula. During the reign of Claudius, through the popularity of the freedman Narcissus, he obtained the office of the legate of a legion in Germany, which meant that he became the lieutenant of the commander of that legion. The governor of Germany at the time was Galba, the future emperor.

Unreliable and unstable, through revolts and the violent deaths of most emperors, imperial power was strengthened and finally stabilized by the rise of the Flavian family to the throne. This family, of obscure origin and without a well-known genealogy, gave Rome much more valuable and reliable rulers than the Claudia family.

Who is Titus Flavius Vespasianus?

Titus is also known as Emperor Flavius or Vespasian. Born, in the Sabine country, not far from Rhaetius, his childhood was spent on his grandmother’s estate near Kozy in Eretria. He began his service just under Tiberius as a military tribune in Thrace. He passed it quickly and successfully: after the quaestorship, he was given control of Crete and Cyrene, then elected aedile, and in 39 years was given a praetorship. As aedile, he is said to have taken poor care of cleaning the streets, so an angry Caligula Gaius Caius once ordered the soldiers to pile the dirt on him in his senatorial toga chest.

Titus Flavius Vespasianus was a Roman emperor who, before ascending the throne, gained military fame during the reign of Claudius. Initially, he served as a legion legate in Germany. And then, in 43, he was transferred to Britain, where he took part in more than 30 battles with the enemy.

Vespasian came from an ignorant family of Flavians. His grandfather was a centurion or even a simple soldier in the army of Gnaeus Pompey. After his retirement, he made a fortune by collecting money from sales. His father, a tax collector in Asia, did the same.

Places from the times of Titus 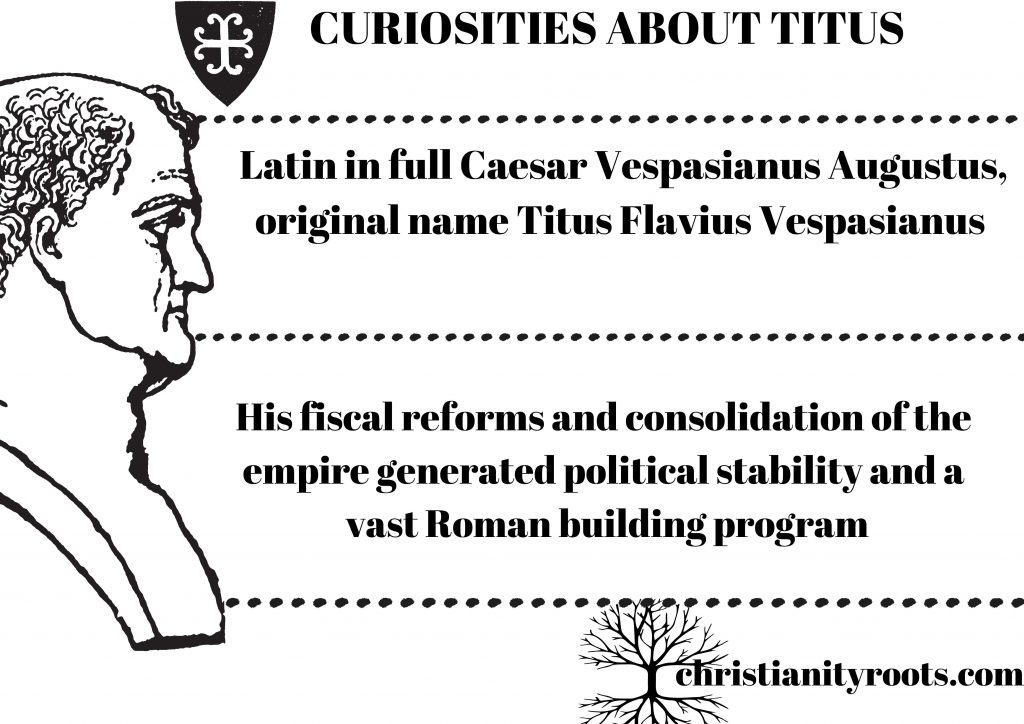 What bad things did Titus do as an emperor?

After Nero’s death, Vespasianus did not advance in the battle for the throne until he felt confident enough of the forces and support he could count on. As a new and unexpected prince, Vespasianus lacked the authority and a certain majesty required of an emperor. But his seriousness, firmness, clarity in decisions, and fairness won him over.

According to all historical sources, Titus did evil things as emperor because he destroyed Jerusalem and the Temple in Jerusalem, thus killing all existing Christians. Arriving in Rome after receiving due honors, he ascended Rome’s throne at an age full of vigor, naive observation, thrift, and humor. Throughout his reign, he valued nothing more than the strengthening of a state weakened to collapse and its beautification.

In the army, indiscipline reigned. Soldiers who had reached the heights of audacity and insolence because of previous weak leaders, who bought their friendship and betrayal, he inflicted severe punitive measures. In the free cities, in the provinces, and even in the client kingdoms, there was unrest. On top of that, he was endowed with the quality of experienced host leaders. Characterized by a natural mental balance, life experience, and the thoughtful spirit of the age, he was a salvation for the Roman Empire and the Roman people.

Why did Titus destroy Jerusalem?

Searching everywhere for museum pieces, he built the most beautiful and oldest collection of the empire. It contained senate decrees and plebiscites on alliances, treaties, and privileges granted to citizens almost from the founding of Rome.

Rome was looking very ugly after the lootings. To change the face of the city into ruin and disorder. It allowed anyone to occupy vacant lands and erect buildings on them. Unless their owners did so, he started the reconstruction of the Capitol by setting a personal example. He was the first to clear the land and carry the materials. Titus took it upon himself to rebuild the three thousand copper boards that had burned with the Capitol.

“The body of a dead enemy always smells sweet. It becomes an emperor to die standing.” Why is Titus important?

Vespasianus was old, so he had to decide and execute what he wanted quickly. The time of life wouldn’t let him delay. He erected a new building, the Temple of Peace, very close to the forum and adorned it with art objects from different countries. From the beginning of his reign to the end, he was friendly and gentle. He didn’t hide his modest appearance; he even talked about it without any inferiority complex.

Titus is necessary for his example in rebuilding and beautifying Rome to reconstitute the treasures of values. He impressed the crowd of plotters and leeches of the capital, of undeserving drones. While commanding great respect.

He built the largest amphitheater Colosseum in the Roman and ancient world, a monument that has remained the most significant construction of Rome, a wonder of the ancient world. The work was never completed in all its grandeur because the inauguration was celebrated only a year after his death. The celebrations were organized by his son Titus, who succeeded him to the throne.

Why was Vespasian a good leader?

With all his proverbial rudeness, he has been very generous to everyone when he could afford it. He supplemented the incomes of senators, gave annual pensions of five hundred thousand sesterces to poor consuls, and rebuilt many fortresses in the empire destroyed by fire or earthquake. He was the first to give Greek and Latin rhetoricians an annual pension of one hundred thousand sestertii.

According to scientific and empirical sources, Vespasian was a good Roman emperor because he did everything he did for the good of Rome. At the same time, Vespasian took command of the army and brought out auxiliary troops from everywhere. He began his campaign in 67, realizing that he faced a frightening and dangerous undertaking. The Jews did not risk fighting the legions in the open but took refuge behind the walls of cities and defended themselves with extreme tenacity.

The one extraordinary indictment his contemporaries leveled against him was greed for money. He reinstated all the taxes eliminated by Galba, added new and heavy ones, and increased the taxes of the provinces to double in some cases.

How did Vespasian initiate his war preparations?

The troops, who had always tied their fate and hoped to the able commander, were ready to propose their candidate for the throne of Rome, hoping for commensurate rewards. He became the candidate of the troops in the East but did not venture into the fray for the throne until he felt sure enough of the forces and support he could command.

Vespasian began his preparations for war by recruiting conscripts and drafting veterans into the army; the most prosperous cities were instructed to set up workshops for arms production. In Antioch, they began to coin silver and gold, and precious coins.

Legates were sent to the parties and Armenia, and arrangements were made so that the borders would not be protected after the legions left in the civil war. He distributed the offices of prefects and procurators and appointed new members of the Senate. So most of them were distinguished persons who soon took high office in the state. Vespasian’s son Titus remained in Judea; he decided to go to Egypt.

3 Amazing Facts You May Not Know About Emperor Titus

Titus was very communicative in all circumstances. He treated many things in jest, as he was very ironic and spontaneous, with a muted and accessible language. He didn’t refrain from even the most pompous words. Several very witty jokes remained from him. You can find three other exciting facts about Titus.

Many of Vitellius Vespasian’s soldiers were shot and punished, yet he did not let the winners go over the top or immediately pay them their legal prizes. In the summer of the 1970s in Italy, Vespasian set things right in the army since the soldiers had reached complete licentiousness: some were proud of their victory, and others were appalled at the dishonesty. Titus never missed a single opportunity to set things right.

At the meeting, he was awarded the titles of Caesar, Augustus, and all the other titles that were due to the prince. As soon as news of this reached Judea, the soldiers, who had fled to Vespasian’s tent, gleefully welcomed him as emperor. The first to pledge allegiance to Vespasian on July 1, 69, were the legions of Alexandria.

3. Titus ended the Roman war with the Jews

Titus took Jerusalem and ended the Jewish war, a triumph was celebrated in 71 A.D. During Vespasian’s reign, Achaia, Lycia, Rhodes, Byzantium, and Samos lost their freedom again, and the mountains of Cilicia and Commagene, formerly under the kings, were converted into provinces.

As soon as he settled in Judea, he made a name for himself in the neighboring provinces by enforcing discipline in the camps. He fought his first battles with such energy that he commanded the respect of his enemies and his men. Vespasianus reinforced his troops with two legions, eight squadrons, and ten cohorts and took his eldest son Titus among his lieutenants.

Thank you so much for your time. If you enjoyed reading our article, play the following Quiz to test your knowledge about Vespasianus. Also, I want to wish you to experience the best day of your life!

Early Christian martyrs in Rome | A Historical Study of Their Impact